Recognizing that different venues offer different opportunities to practice your “craft” of meeting women makes you more methodical at becoming an expert. Today’s post gives some perspective about what the club offers to meeting women and practicing your gig. More specifically, we’re going to learn to attract girls in clubs.

I think of clubs as intense places — the romantic, pick-up component is so thick in a club setting that it can be very intimidating. I cut back on this with the following actions and beliefs. 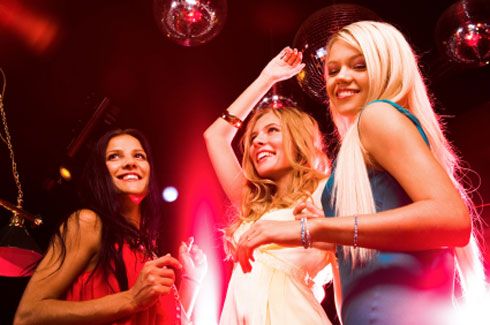 I’m there to just dance and have fun. If I should meet someone, fine, but the probability is sort of low. For one, it’s hard to talk and I really want to talk at least a little because I’m not looking for just a shell. I need to have a meaty, chewy interior in a man I truly like.

Two, I don’t like this whole idea of people thinking that I’m “single” and there to “find” someone. You’re not “looking” for anything, you’re there to mingle, chat it up, practice your craft. When I’m in a club, I get uncomfortable about this vibe of “looking” for something that is …what? lost?

I take back my power by doing the following.

Take Back the Power

I start with the energy I’m putting out. I’m here to party and I think of a club as one big snowed-in airport, meaning we all missed our planes, we’re going to be stuck here spending the night, since we’re in this together we might as well make the most of it, and have a damn good time as one big group.

This means you talk to anyone and everyone…really….everyone.

And talking to people does not imply, in any measure, that anyone is “interested” in anyone. I’m just talking and if I’m interested I’ll let you know directly somehow, otherwise just assume I’m crazy friendly like this with everyone. If I ask you to dance, it’s because I love men and want to dance with them. I love their bodies and appreciate them, otherwise it’s not a screening process to sex or dating or marriage. It’s just a dance and men are sexy. I dance with my girlfriends too, but since we are in one gigantic snowed-in party, why not dance with everyone? Share this mindset with me and be as outgoing as you can be. Trust me, practice this enough and you’ll get very good at it.

Now I cannot pass out cards laying out the ground rules, so this is my game to send out the non-verbal cues to those who are astute. I cannot be responsible for those who have little emotional intelligence and think I “want” them. I have to just let those people go and pay no attention to the ones who take any acknowledgment to mean “something”.

A Couple of “Rules”

1. I like to follow the well known three second rule. I don’t make a lot of long eye contact with anyone – it builds up pressure and breaks the rules…my rules. Of course, I like dancing with men I find sexually appealing so I’ll ask them to dance, along with those guys that are nice and fun but not my type. I don’t want to act weird with the men I’m attracted to, so my three second rule is don’t look at them longer than that. Either make a move within the three seconds in a super casual way or at least don’t look anymore. Read how to approaching girls for more on this.

2. As soon as I get into the club, I start talking to someone, anyone to get into the groove. I don’t allow myself to warm up. I warm up fast by just immediately talking to the first person I run into. This is my way of getting me into the groove fast. This is really helpful and I suggest you make this a rule too even if you wait to follow my other rules.

4. Finally, I have no expectations even when someone pays attention to me. I remember that this is a no-holds barred environment and he is likely doing the very same thing I am so I won’t take a simple dance or conversation to mean anything more unless he explicitly tells me it does.

When you get good at this gig, the casual, need nothing vibe will ooze out of you (very hot) and your social value rises exponentially. When this happens, attracting girls in clubs will happen naturally. In another post I will share how this vibe can help you in other venues where you do want something from someone.