Shhh! I’ll tell you a secret. I’m good at people-watching. I was at a party yesterday, and I saw this guy chatting with a flirty girl: as I watched them, I could literally see a big red sign flashing in his head: “How can I compete against the other men in here to attract that flirty girl?” I’m sure this guy doesn’t spend a lot of time wondering how to be attractive to women.

Let me tell you, he could nudge his attractiveness up quite a bit if he adopted the following reality: “How can the women here compete against the other GIRLS in here to attract ME?” The idea is that instead of chasing women, you should be working on getting them to chase you.

What you need to realize is that there’s a greater dynamic going on here. You’re at a party, it’s a closed social environment in which people will observe each other constantly: nobody’s actions go unnoticed. Now, imagine how valuable it is to be socially successful in that place! Displaying a great social vibe will boost your attractiveness, believe me. 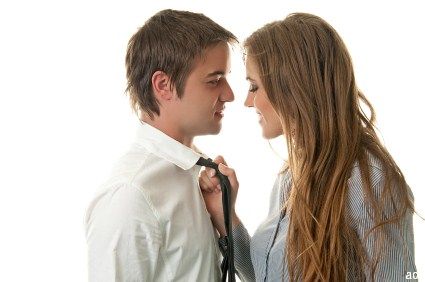 In fact, this applies to any environment. How people perceive you determines your attractiveness. It’s pretty logical, when you think about it.

Is this girl up your alley?

Now let’s put you in that position at the party. What a glorious vantage point.

There’s one way to find out: go and test the other girls. Wander off and mingle. Find out how the other girls roll, what their desires and goals are, yes, in fact, if they even know what they want, and if they match your standards. Shy girl wants to get laid, but is too shy to say so, skinny girl loves the seaside, laid-back girl is a sculptor, bouncy girl has a damn good fashion sense. This recon work gives you two benefits:

1. You establish a “ranking” of the present girls
2. If Flirty doesn’t work out, you still have Shy, Skinny, Laid-Back and Bouncy!

Isn’t that an amazing position to be in? Now, if Flirty is really up your alley, go back to her and say the following (and I dare you to do it):

“Hey, I just spent an hour talking to all the other girls in this place, and you’re my favorite because [insert VALID, SOLID REASONS here, and I don’t mean her boobs]. Come over here and sit down with me, I want to learn more about you and grope your legs while I’m at it.”

She’ll love you for it. You know why? Because she has a big ol’ red sign in her head saying “How can I compete against the other girls in here to attract ANY guy?” Trust me. I’ve seen it. You just answered that question for her, with concrete arguments, made her laugh AND implied that her legs are hot!

What if she doesn’t want you?

Hey, let’s be real. She may say “yeah well I have a boyfriend”, or “sorry, but I’m not interested”. Are you gonna crawl up in the corner in a fetal position? No! Remember what I said above. You say “Thanks”, turn on your frickin heels and go back to the other five you have in store. Oh, and while you do, be sure to watch her kick herself over letting you go.

You have to learn one thing: women are COMPETITIVE. I saw a friend talk to a girl at a party and then move on to another one he liked more. I asked the first one later and if he got her number. “No”, she said. “He’s making out with some French chick now.” I asked: “Is somebody jealous here?”, and she answered: “Well, maybe juuuuust a little.” Never mind that she talked to three others in the meantime herself!

They See What’s Going On

Let that be a lesson to you. The next time you wonder how to be attractive to women, turn that question around and ask yourself how THEY can be attractive to YOU. Do it for yourself, and do it for me! I’ve grown afraid to people-watch because I see so much misery when I do. Make my world a better place! Go out, build your social proof and get the girl!