I recently visited a comedy show where a number of stand-up comedians presented their material. It started out funny and stayed that good until the very end – with just one exception. Right in the middle of the show, this tall, burly guy came on. He had a bit of a hillbilly attire, with a loose plaid button-down shirt hanging over his rustic trousers. No, compared to the others, this guy wasn’t funny. Yet in spite of not being funny, he had us keeling over laughing after mere minutes. What made him stand out? There was his improvisational talent – and one simple, but incredibly effective technique that you will help you be funny with women.

The comedian didn’t even bother going into the material he had undoubtedly prepared for the evening – like his colleagues. Instead, his first words were something like this:

“I don’t even know what I’m going to say. I guess I’ll just start with random stuff.” 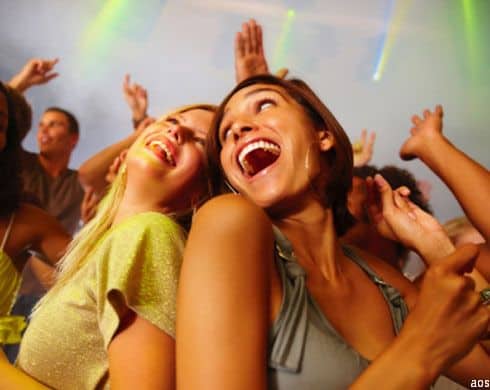 And so he did. He started interacting with his audience completely unscripted (my friend had seen him shortly before and confirmed), making up his stuff as he went along. So he asked one guy what he was doing, then took that job as a basis for jokes, handing it to other audience members to comment on, and reacting to laughter or shouts coming from the spectators.

That comedian proved one thing: you don’t need much “canned” material when you know how to work with the present situation.

The here and now is your “material”

We often put a lot of pressure on ourselves to come up with original and funny things to say or do when interacting with others, especially girls. While we frantically try to recall all those funny lines we’ve memorized, we overlook what’s right in front of us. When learning how to talk to girls, we recommend you don’t try to hard to make her laugh.

Some tools to use with the present moment are deliberate misinterpretation or misunderstanding of a situation, a thought, an idea or something somebody says, or coming up with completely off-the-wall stuff. A popular example for the latter is the line “that’s what she said” brought up in the most impossible situations to ignite people’s imagination – suddenly, new, hilarious contexts come up where none could have been before.

And this is where that comedian really scored. The others seemed in a “rush” to get their prepared material out there, throwing in planned audience interaction where it fit best. Worked fine for what it was worth, granted. This guy, however, had all the time in the world. He didn’t have to resort to canned material (he did later anyway, but by then he had established a dynamic flow that supported and amplified it very neatly) because he was in no rush to come up with whatever funny reaction he found best and most authentic to whatever audience reaction he got.

At one point, a woman in the audience was laughing so hard her voice seemed to tumble over. He stopped in the middle of his sentence and slowly, oh so slowly, turned his head in her direction with a playfully bewildered expression, one corner of his mouth only slightly raised. “I used to have a laugh like that”, he said calmly after a couple of seconds. “I just had to…” and a little break “stop smoking weed.”

The line was fine, surely funny enough, but his delivery was side-splitting. Those seconds he took to simply have a physical reaction, where he turned his head with that glance in his eyes, was so funny it drove tears to our eyes – especially after all the improv and delivery that had gone before.

The best comedian of the night was a great example of grabbing people right in the gut to make them laugh. How to be funny with women does not rely on jokes, but rather the delivery. What people really want to see and experience are the moments where you can literally see the gears grinding in the comedian’s head as he comes up with the next reaction. The audience – your audience – wants to be completely involved, swept away in the dynamic of your humor. Pre-made stories can work, but if you really want to grip someone, learn to improvise. Take classes, if necessary. You’ll spontaneously reap the benefits by being much funnier with women.