I was completely baffled and amazed. This guy looked like a beaten-up spider-monkey mutant. He walked into the bar and sat down right next to the hottest chick. Without hesitating, he started chatting her up, and in no time, he had her cracking up. I couldn’t bear not knowing what made this guy so awesome, so I moved closer to them. My jaw dropped: the jokes he was cracking were completely lame, and to top it off, he was offending her all the time. What the heck? Well, that was several years ago, and I was clueless. Today, I understand why the mutant was getting that girl’s affection so easily: he knew exactly how to make women laugh.

Teasing Will Make Them Laugh

I am convinced now that one of the the first things this guy did was to tease the girl. Even when I was outside of earshot, I could feel the positive energy he radiated when he came in. He seemed genuinely curious about her at first, but after only a sentence or two, he turned away with disapproval in his face. It could have gone something like this: 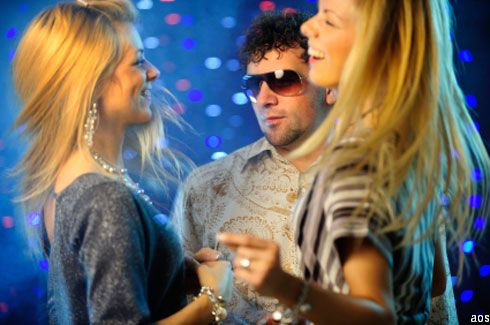 Him: Hey, do you know if there are any good movies playing lately?
Her: Good movies? Yeah, I just saw Freddy vs. Jason the other day.
Him (turning away with disapproval) What? Are you another one of those psycho chicks? I’m sure you have a teddy bear at home with a big old knife in his back. This is not going to work out between us.

This may sound offensive on paper, but if you play around with it, you’ll have a woman laughing in no time.

Finding something to tease a woman about is easy. With a bit of creativity, you can deliberately misinterpret pretty much anything she says. Throw in some exaggeration, and try to be random and unpredictable. This is something you can train like a muscle.

There are some things you want to bring up when teasing or playing with a woman:

Bring up the (imagined) relationship between you and her quickly! The most effective teasing happens when you picture her as your pursuer. “This is never going to work out between us“, “you won’t get into my pants that way” or “I’ll keep talking to you if you stop checking out my ass” are some sample remarks.

I already mentioned that above: playfully suggest that she’s evil, naughty, boring, drunk, egocentric, spoiled… clumsy… or a devious schemer. Anything you want. Truest me, as long as you keep it playful and fun, they’ll love it. It will often trigger a “no, that’s not true!” response from her, and if she has taken some interest in you, she will try to clear her name: “I really don’t drink that often! I swear!”

Which allows you to follow up with: “now you’re just trying to impress me. I’m not that easy.”

This is so easy, it’s ridiculous. Shake your head and say: “Michelle, Michelle, Michelle. What are you doing.” The sooner you say her name back to her (just append it to any of your statements), the quicker she’ll realize that you made an effort to remember it. Also, people really like hearing their name, and if you say it in a slightly misgiving way – like a mom scolding her child – they’ll always laugh. This is almost infallible. So, for you to remember:

Don’t laugh or smile too much at what you’re saying. Your best bet is to deliver all your teasing lines as matter-of-fact statements with a deadpan, straight face. Imagine you’re having dinner with a girl and she tips over a glass.

You: Great, Julia. So that’s your idea of making me wet, is it?
(she cracks up. You pick up a napkin and place it on the spilled drink)
You: Here, lemme clean up after you. (shake your head in fake disappointment) But it’s cool, I’m tolerant, you know. If that’s how you roll, we can head out later and stumble over dogs and little kids on the pavement.

No emotion. You’re the funny guy, not the laughing guy. I mean, watch all the great comedians in the world! Do they announce their own jokes by laughing about them? No! Don’t do it either.

Back to the mutant who knew how to make women laugh. He soon had her giggling at the lamest jokes. Why? Well, when a woman does that, it means one thing: she really likes you. It’s no longer the lines that are funny. It’s the overall great feeling you have sparked in her that will keep her laughing, no matter what you come up with. And if you reference some of the stuff you made up earlier in the interaction, it will even make you both feel like “insiders” who share the same secret joke.