The main thing that guys tend to overlook when talking to a cute waitress, a girl behind the cash… is that they are no different than all the other girls you might have approached today. They’re still women, with women’s desires and emotions. They’re susceptible to seduction just like any woman you meet at a bar or café.
Since they’re at work, they will try to do their job. It’s your job to get her off that topic asap. Cut the conversation thread. Change the subject to something more personal and playful/interesting. If you want to pick up a girl at her work, make sure that you don’t let her go through her normal script. If you do, then you become ‘just another customer’.

“Hello sir, have you heard of the Bingemaster?”
“No, what’s the Bingemaster?”
“It’s an exercise machine designed by…” (Cut the thread)
“Do you exercise Cindy?”
“Of course.”
“I like to run.”
“Oh I do too. I love running.”
“I like listening to punk rock when I run. Gets me angry at the fat. How about you?”
“I listen to podcasts.”

If you cut the thread, she may try to re-initiate the sales process. This is why you must continually steer the conversation away from sales and logic, and into joyful life experience. The further away from the topic of work, the better. 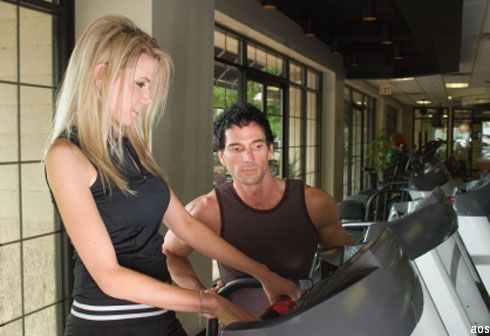 I like to use the subject matter to elicit her values. Like if she’s talking about body soap, I’ll say, “Oh man this smells great. I smelled something like this in Thailand last year. Do you travel much? Oh yeah, where did you go?”

New guys always think they are sneaky. Like if they hang around talking about work long enough, the girl will just throw them signs of interest. It’s not the case. It’s their job to sell or provide a service. The good news is, they are bored. Unless they are on a commission or their boss is nearby, you could be a real hero and provide a good flirt. But you need to drive her mind away from work related subject matter, right away–within thirty seconds.

You need to let her know you are attracted. The best way is to tell her. Say, “Hey you’re funny, where are you from?” This is day game 101: Be normal, be cool. be happy, be straight. If you think she is cute, tell her. Honestly, I’ve had a lot of success simply by being straight. It’s ok to use push/pull tactics, but be graceful.

Understand they have a job to do. If they seem distant, aren’t making eye contact, aren’t laughing at your jokes …then they probably aren’t interested, or are very busy—working! Don’t be a stalker. It’s so much easier to tell a girl you’re attracted than to play silly games and waste her time. She’s trying to make a buck. She’s hustling. So don’t waste her time.

Be aware of the social context

If you ask for her number, realize her boss is probably in the room. She’s a professional and it’s not cool to get picked up at work. So be discreet. If she’s playing along and flirting with you, help her out. Make it look like she is working. I often do things like grab a shirt off the rack and say, “Here, now it looks like you are working and not just flirting with me.”

You can be direct with them, and make them look good. Chicks love that sort of playful boldness. It also shows you have social intelligence. You’re aware she’s working and won’t get her fired.

It’s totally normal to flirt with girls at work. They’re used to it. The trick is to stand out from the dozen other lame, indirect wimps she met that day. Be unique. Be inventive. Be playful. There are plenty of guides on this website that will teach you those skills. When you master this, you’ll be able to pick up girls while they work.

Remember, work girls are great for warming up your conversation and flirting skills. (We cover this in how to start a conversation.) Talk to them, play with them, but don’t pester them. If you want to play longer game, you can return in the future. But don’t be a stalker! A stalker is the guy that never, ever goes direct. Never tells her what he really thinks–That is truly weird.