Ever been to a party where one dude told amazing stories and entertained people all night? Great comedians do the same thing: Eddie Izzard, Robin Williams or Chris Rock can deliver awesome stories on the spot, often improvised, and in a captivating manner. They know how to tell a story and consequently they’re the life of the party! But how do they do it? There’s a secret language of great storytellers that many of us don’t recognize: it’s not so much that they have cool stories to tell – it’s how they tell them. Storytelling is an art, and there are means of making any story fascinating, funny, captivating and attractive.

The first step to any story is the opening. This is where you need to grab your listeners’ attention, so make sure it’s a damn good teaser. You do that by answering some of the most important questions right away: who, where, what, why, how? “Did I tell you about the time this fat guy attacked me and Alex in France?” Simple! Now, you’ve sparked attention. Let’s take it from here.

The art of storytelling is as old as language itself and common to all humankind. There are some basics: every story has a plot and characters, and a point of view from which it is told. A great storyteller will get you absorbed in the plot. You’ll feel like you’re actually there, experiencing the events and interacting with the characters. Visualization is a key to that. You can visualize by describing scenes: there’s the French coastline your story is set in, the white houses of the Provence, the sandy beach. Then, there are sensations: the smell in the air, the feeling of the sun on the narrator’s skin and the sound of seagulls. 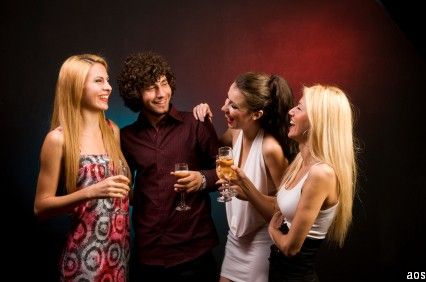 You can also visualize with vocals and body language: use gestures to draw objects or mimic movements, and use your voice to amplify an effect – when you describe the fat dude on his towel, lower your voice and make it broad while you draw his immense stature in the air with your hands.

Use human behaviour to make scenes come alive: we tend to attribute behavior to objects, like “the waves were coming closer to catch him.”

A good narrative will have recognizable emotions and characters who act believably. That’s why even a story set in unlikely surroundings, say a space station, can work great as long as we can relate to the characters, their emotions, struggles and interactions. Describe what you or your characters are feeling, how it manifests in their body – is it a prickle in the stomach, a cold shiver running down the spine?, and how it affects and motivates them. “We approached him, and right away, I saw him clench his fists and I had a dull feeling in my stomach.” Facial expressions and posture say a lot about a person’s emotions, so depict them. Trigger empathy in your listeners, it will put them “in the person’s shoes”: psychologists call this “narrative transport”.

Secret #3: Connection to the audience.

Whatever you do, you want to build a rapport with who you’re talking to. Involve them in what’s happening: “You know that feeling you get when…”, “It’s like you told me earlier…”, “Have you ever been to France?” Maintain eye contact, and I mean steady eye contact. You are sharing something here, so open up and establish a connection. Watch an Eddie Izzard show: he keeps interacting with his audience, even when his mind goes insanely astray. He also draws from common life experience: at the core of what he says, there’s something we instantly recognize from our own lives. Keep that coming! Appeal to human experience!

One last piece of advice, and this is purely linguistic: whenever you can, use the active instead of the passive form of narrative. Say “He attacked me” instead of “I was attacked by him.” The more action you have in your story, the more intriguing it is: we want to hear about people going out and doing things, not about stuff happening to them.

These are just a few elements of the secret language of great storytellers. Your rule of thumb is: be scenic from the very start. Draw pictures, make a setting come alive, describe smells, sounds, sights, feelings, conditions, faces. Then, convey emotions by describing how they manifest: shaky knees, clenched fists, goosebumps.

Finally, make sure that you keep the vibe going with whoever you’re talking to: dissolve the barriers between you and your audience by asking questions, referring to them or relating to their experience. We’re all drawn to tangible, true, authentic yarns. Now you can be the one telling them.