You meet the hottest girl. You run your tightest game. You let a day pass before calling her. The clock tick, tick, ticks. No reply. You send a witty text. Tick, tick, tick. WTF? Another No Reply. Another flake. Why won’t she call me back?

Because you SUCK! You have no game. You’re stupid and short and bald and smell like cottage cheese….You shouldn’t even get out of bed. Game doesn’t work after all…

I know exactly why she didn’t respond. It’s simple. It’s so obvious why. Just click on the link below and insert your credit card info.

Kidding. I really don’t know. I hate flakes too. Everyone gets flakes. EVERYONE! It’s not just you. I’ve had more flaky phone numbers than anyone… I guarantee it. 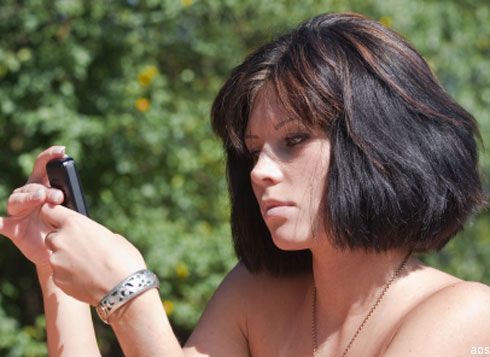 My friend Anna’s Point Of View

Here’s a short interview with my super hot friend, Anna. If anyone has the answers, she will.

A: Hahah okay. How can I help?

Z: You meet a guy and you like him, but never text or call him back. Tell me why? Be honest–even if it’s bad breath, or a weird shaped dick.

A: Haha. If I meet someone at a bar I kind of automatically discount it as being anything real–or maybe I’m dating someone else? (Almost always. z) or in a complicated situation with another person. Or maybe they are only temporary.

A. We had a party awhile ago at my house and i met this guy who was totally awesome from Seattle, but he was going back in a month and he called me to hangout after but I didn’t bother with it because he would be leaving anyways. I don’t often meet strangers I like in bars/cafes/wherever. (I met her in a bar. z)

Oh and also, sort of shallow but sometimes I totally discount guys because they’re too young, ie if they’re under 25 it kind of freaks me out.

A: 23 but the guys that I date are usually in their 30s, so when I meet someone my age I’m automatically like, ‘that wont work!’

A. I do sometimes give out my number to people I’m not interested in and screen the calls because its easier than being like No! I don’t want your number. So maybe guys just think we are interested. I know a lot of people that do that. (Read how to get a number that will get her to call you back)

Becky has the answers

Not satisfied, I asked another hot girl. A swimsuit model named Becky:

Z: What has kept you from calling a guy back? Maybe you liked him when you met, but he calls or texts, and you don’t reply, like a cold hearted biatch.

B: Umm… maybe she doesn’t answer because she likes the attention when he’s talking to her at the bar… but as soon as he tries calling her and shes not interested, she ignores it. Girls think more with their heart and they want guys to make them feel good. If they just want to get in my pants that means that they wont give me what i want emotionally. (Yeah… As soon as he calls her she isn’t in a sexual state. z)

He needs to have something different about him, some mystery (But be in her social circle. Z) and unfortunately … look-wise i need to approve. Shallow, but true (Unless you are famous.z) I guess a girl knows if shes attracted to him or not when she first meets him. Some guys think that if a pretty girl just talks to him she’s interested–not true. We like attention. That’s all haha. (Fair. Z)

Also when a guy does text me, what he says can also determine if I will text back.
If hes trying toooo hard to compliment me at first, then I feel its fake and if he immediately asks me on a date I dont bother either…unless i realllly like him. (So lots of rules that mean nothing if she is attracted. Sigh. z)

The mystery of the phone call

So there you have it. You need to be: fun yet chill, emotionally stimulating yet balanced, well dressed and groomed, handsome, not too old or too young, mysterious yet local, distant but attentive, humble yet witty, nice but jerkish, and generally attractive all around. No problem!

And they never meet guys in bars, or date strangers or give out their numbers at all. If only we could dream up a way to get these girls!?

So how do you get them to call you back? You don’t. Move on with your life. Meet more girls. And never believe what they say they like– they have no idea either.

You are attractive. If you look too deeply into reasons, “why won’t she call me back?” you will be an old man wondering, “how?” If a girl doesn’t call you back…you need to meet more girls. Preferably one that won’t waste your time.